Walking to my car this morning, a ragged orange tabby cat skittered across my path. This old boy is one of the lives saved in the Million Cat Challenge.

My house is on the fringe of Kansas City, and sometimes cat owners dump their unruly cats in my rural area. My longtime neighbor is their savior. She adopts the strays, works with a local low-cost spay/neuter facility to have the cats treated and then she lets them run the area.

She provides supportive food and shelter, but the feral cats get to stay wild and happy. And our subdivision stays mouse-free. Every day, this old boy puts a smile on my face.

Earlier this week, the Million Cat Challenge organizers announced (see above) they not only surpassed their goal of a million cats, but they crushed it. Their calculations show they reached their goal months ahead of time and continue to break new ground in feline care.

This shows the power of a good idea to make a seismic change in how America treats felines in shelters. It all began with a group of dedicated shelter cat professionals who set a goal in 2013 to rethink how communities and shelters managed feline populations. At the time, this old orange tabby might have been trapped and put in a small shelter cage where he would have become stressed by this unfamiliar life. Finally, when he continued to withdrawal and become sick, he would have been humanely euthanized.

The idea to rethink how to manage both feral, community cats as well as adoptable cats are the cornerstones of this program. The Million Cat website provides simple, actionable steps shelters, large and small, can take to transform their feline management. 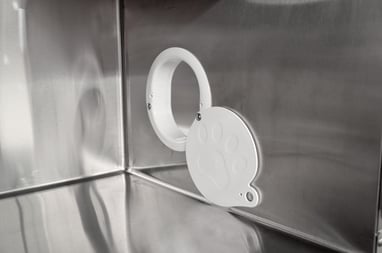 At Shor-Line, we are proud to work with shelter professionals across the country to innovate in conjunction with this positive change in shelter housing. We know animal shelters invested in Shor-Line kennels in the 80s and 90s. Now, thanks to work with university shelter professionals, we are able to offer a Kat Portal that retrofits two small Shor-Line kennels into a comfy cat suite.

The last several years have been an exciting time to work in shelter treatment and medicine. A revolution of talented, gifted professionals are working in large and small shelters to change how America treats homeless pets. We salute everyone who helped reach the Million Cat Challenge.

Now, it is off to save the NEXT million cats!

How Far We’ve Come Since Katrina

The HSUS Animal Care Expo returns to New Orleans this week. It will recognize the 10th anniversary of the Hurricane Katrina disaster, which also became the largest animal rescue operation in U.S. history.

Hurricane Katrina goes down as the third deadliest U.S. disaster, claiming 1,836 lives and doing $110 billion in damage.  For pet lovers around the world, the heart-breaking stories of people being forced to leave their beloved pets behind mobilized the animal care community.

There were many heroes in the stories that came out of New Orleans. And many of these heroes will be at this HSUS show.

But for every rescued pet, there were 8-9 who did not survive.

“The single most compelling fact for emergency managers to learn from Katrina was that approximately 44% of people who did not evacuate for Hurricane Katrina stayed, at least in part, because they did not want to leave their pets,” the Fritz Institute reported in 2006.

This brings us to the second set of heroes—those who helped pass the Pet Evacuation & Transport Standards (PETS) Act in 2006 so that never again will people be forced to decide between their animals and their safety.

Although the PETS Act was intended to protect humans, it had a surprising effect. In a study conducted post Hurricane Ike (Texas 2008) found that some evacuees left because they wanted to get their pets to safety.

There continues to be work to be done to help people understand they can take their pets with them if they need to evacuate. Great progress has been made in creating plans to evacuate people with their pets and identify facilities to handle the influx. And, work to help displaced animals continues.

The animal care community can take a bow for its world-leading efforts in championing the human-animal bond in disasters. The work HSUS and committed animal professionals have done has changed the fate of not just animals in the U.S. but around the world.

At Shor-Line we are proud to be part of the animal care community. Check out the Shor-Line Booth at HSUS. We also have donated one of our newest innovations, the Kat Play-Around™, for the HSUS raffle. It provides multi-cat housing that keeps groups together in a kennel that lets cats be cats.

It is just one of many products Shor-Line has developed to help the shelter community improve the lives of companion animals. See ya at the show!!