One misplaced door, room, or closet can throw off your entire traffic flow, so heed this advice for creating an efficient floor plan.

By Sarah A. Moser 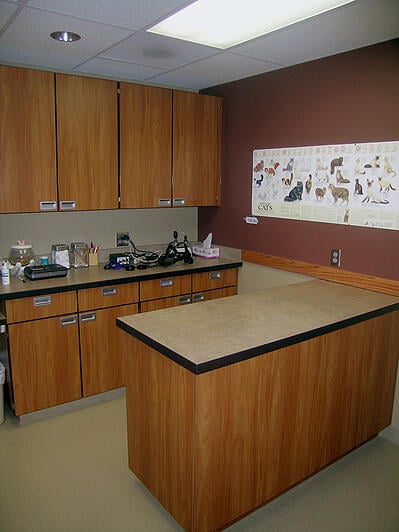 Talk to anyone who works in a poorly planned hospital, and you’ll probably hear the words “if only” quite frequently. If only the exam room opened to the treatment area; if only the storage area wasn’t so far from the reception desk; if only the door swung the opposite way into surgery; and so on. Details that may seem minor can pose major inconveniences to doctors and staff members. To make your days flow more smoothly, two experts in the hospital design field share their top peeves with floor plans and offer wiser alternatives.

Mistake 1: One-door exam rooms
Making doctors and clients use the same door to exam rooms just doesn’t work, says Dr. Ross
Clark, a veterinarian in Tulsa, Okla., who’s been in the business since 1966. He says tripping over leashes and fighting traffic congestion in the hallway are constant battles when you only have one entrance and exit.

Privacy is another issue, says Brad Rabinowitz, AIA, an architect in Burlington, Vt. “Doctors often get sidetracked by staff members in the hallway between  appointments,” he says. “Separate entrances minimize interruptions.”

With veterinary hospital design making up nearly 30 percent of his business, Rabinowitz recommends planning a layout— including the number and location of exam room doors—with your specific needs in mind. “There’s no universal way to lay out a hospital,” he says. “Just mentally run through your daily routes to see what works best for you.” For example, if you want staff members to bill clients in the exam room, consider the steps a receptionist or assistant must take to reach those rooms.

Mistake 2: Storage issues
“Almost all hospitals shortchange their storage areas,” Dr. Clark says. Rabinowitz agrees, and he recommends storing items near their point of use. “Having only one central supply area doesn’t work,” he says. “It’s best to incorporate ample storage space in exam rooms, treatment areas, and surgical prep areas and use a central supply area for stocking long-term supplies.”

Don’t forget about food storage as well. More and more practices are dispensing food, and that presents a real challenge. “It’s heavy, and some places move a lot of it,” Rabinowitz says. His
solution: Create a smaller storage or food retail area near the reception desk so staff members don’t have to haul bags back and forth across the hospital. To make unloading and stocking large quantities of food easier, Dr. Clark recommends locating the central storage area near the back of the hospital with its own separate entrance. 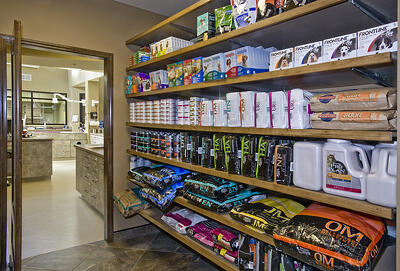 Mistake 3: Separate entrance and exit doors
“From time immemorial, veterinarians have worked hard to get clients in one door and out another,” says Dr. Clark. “But unless you’re building a large hospital with a completely separate checkout area, most people have a natural tendency to go back out the door they came in.”

Although Clark thinks the theory behind separate entrances and exits is a good one, he doesn’t think it’s realistic for smaller hospitals. “Separate doors are confusing and inconvenient for clients,” he says. “You get new clients all the time, so you’ll constantly be educating them on something that doesn’t bring much benefit anyway.”

Mistake 4: Pets parading through public areas
Pets need to be taken outside multiple times a day from various places in the hospital. But according to Rabinowitz, transporting pets through public areas isn’t a good idea. “It’s best to make a clear path from the runs or wards to the outside and keep pet exit doors out of public view.” He also recommends placing outdoor pet areas away from delivery entrances, staff entrances, and staff break or lunch areas.

Mistake 5: Grooming areas that open directly into public areas
Although placing the grooming area off the reception area is entertaining for clients and a good advertisement for the service, it poses a health concern, Dr. Clark says. The accumulation of hair in the grooming area can get tracked into the public areas or sterile treatment areas. To reduce contamination, he suggests designing grooming-area entrances that open into hallways or make team members pass through two sets of doors. While practice owners and architects still make plenty of floor plan mistakes, Rabinowitz says the average hospital is much better than it used to be because veterinarians are continuallylearning and improving their practices, Rabinowitz says. “Good veterinary design has become a standard of the industry,” he says. “I don’t think many professionals apply the same importance to their spaces as veterinarians do, and that benefits pets, clients, and the entire team.